Welcome to the University 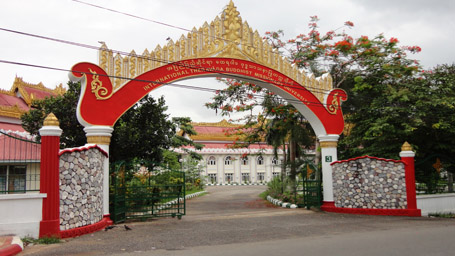 The International Theravāda Buddhist Missionary University(ITBMU) is situated on the Dhammapāla Hill, Mayangone Township, in Yangon, The Republic of the Union of Myanmar. It was inaugurated on 9 December 1998, under Ministry of Religious Affairs and Culture.

Myanmar has carefully preserved Theravāda Buddhism in its pristine form for nearly one thousand years. Now she is sharing her knowledge of Buddhism both in theory and practice with the people of the world to promote their happiness and moral well-being. Those who wish to learn Theravāda Buddhist canonical texts and insight meditation in Myanmar tradition have a golden opportunity to study them from the Myanmar Buddhist scholars of high academic achievements at the same institution. The Myanmar and Pāli languages are included in the academic programmes. The medium of instruction is English.


There are eight objectives of the university:

(a) To share the genuine Theravāda Buddhism (the teachings of Gotama Buddha) with the people of the world.
(b) To study and comprehend the canonical texts of Theravāda Pitaka as approved successively by the six Buddhist Councils.
(c) To abstain from evil deeds and practice good deeds.
(d) To promote the four modes of sublime living (Brahma-vihāra) which would lead to the establishment of peaceful and prosperous world.
(e) To train more missionaries endowed with good morality who are well-versed in Pitaka literature and meditational practices.
(f) To teach and train local and foreign students who are willing to study Theravāda Pitaka in its pristine form.
(g) To collaborate with local and foreign universities, and also to cooperate with other universities that will support the objectives of the university.
(h) To send missionaries to foreign countries for the propagation of Theravāda Buddhism.